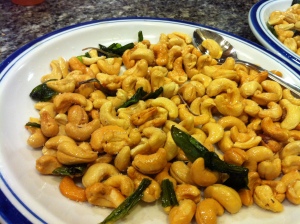 As a parent of school-aged children and a stay at home parent (occasional work at home parent), I have seen this little word that buzzes by me periodically “on-ramping”.  I love to write and I have a close relationship with my OED and Roget‘s but I am not a huge fan of made up words (especially business-related lingo).  Now I’m not sure if I dislike the word more or the concept, but I’ve decided I’d rather spend time with my ramps and not worry about what on-ramping is so here we go.

If you haven’t seen or tried a ramp yet, they are becoming a bit easier to find these days as wild, fresh, seasonal food has become trendy.  Ramps are a spring wild allium that makes an appearance in New England at the same time as fiddleheads; right about now.  They look a bit like a wild scallion or spring onion, but the taste is nothing like a scallion.  Locally, they are available at Formaggio Kitchen and Russo’s (among other shops I’m sure.)

So what have I done with my ramps lately?  Well today I decided to do a variation on a theme of my husband’s most beloved treat, Robert Sinskey Vineyard’s olive oil roasted almonds.  I had a bag of raw cashews that I wanted to roast and I decided to do the same technique with the cashews as I had done with the almonds, but instead of the herbs, I put in the greens and whites of 2 1/2 ramps.  Sprinkled with some fleur de sel (Le Sel D’Isabelle to be specific) and I’m very happy with the results.  Now I just need a warm afternoon a glass of wine and some friends or neighbors over for an aperitif in the yard.

Just as I finished making the roasted nuts, it was time for lunch so I cut up a tomato and some pickling cucumbers and grabbed a handful of baby spinach.  Then, a forkful of Dijon went into a jar with some white wine and balsamic vinegar and I poured some of the warm ramp infused oil, left over from making the nuts, on top.  It makes a delicious salad dressing and was the perfect lunch, topped with some croutons made from last weekend’s stale Brioche.

Speaking of last weekend, we had family over for brunch and I was in the midst of putting together various elements of the school’s auction for that Sunday so I wanted something quick and easy to serve.  Dad and I picked up some delicious house-made bacon from Formaggio Kitchen (salty but meaty).  I wanted to scramble eggs as my uncle George does in a small sauce pan.  So, after cooking the bacon I threw the ramps into the bacon fat to flavor the fat and lightly cook the ramps.  I then put a teaspoon of the fat into the saucepan and swished it around to coat the sides of the pan.  10 eggs were cracked and whisked into the saucepan and continuously whisked slowly over low heat.

I took out a serving of eggs for the kids (no ramps please mommy).  I then tossed in the ramps cooked in the bacon fat and paired with the bacon itself, a huge Francese that mom and Isabelle picked up from Iggy‘s and a bottle of Prosecco Riondo Rose was opened, and brunch was served.