Finding a hotel in any metropolitan city can be a little mind boggling. There are the posh hotels downtown that risk being party central, budget busting, or just too close to the hustle and bustle to be conducive to a good night’s sleep. There are the hotels that claim to be in the city but, when you open the shades and look out, you have no idea where you are and this “neighborhood” isn’t on any of the city maps.

There are also the then fabulous now tired hotels that your mother’s friend recommended, she just failed to tell you she hadn’t been there in a few decades. The nice thing about Boston is that it is a  compact little city. You could stay in the suburbs and still have easy access to everything in the city.  Boston’s historic and truly “New England” suburbs are just a short drive or train ride from the city or you can find a little corner of the city that suits you just fine and works as your home base.

Boston’s Element Seaport is a fabulous option for families for several reasons.  The Seaport is a relatively quiet corner of the city.  There is space to park in a nearby lot, you can leave your car there for the whole visit and, walk, take an Uber or public transportation to museums, the freedom trail, and local hot spots.  The Element Seaport is close to the Institute of Contemporary Art and the Boston Children’s Museum.  The New England Aquarium and Rose Kennedy Greenway are not far away either.  During the warmer months, Lawn on D is literally across the street, so if you want to play some lawn games, or soar through the night sky on a lit up swing and feel like a kid again, you can do that too. 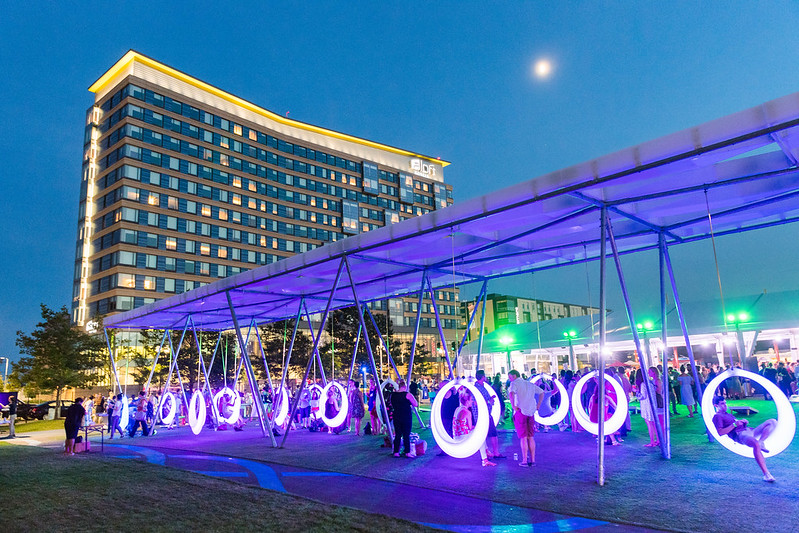 In addition, some of my favourite restaurants and places to pick up a bite to eat are in the Seaport.  You have Flour Bakery and Café (its all amazing but vegan or not, you must try the vegan chocolate cake/muffin).  There is Committee, which has a fun, hip, relaxed vibe and some of the most delicious food in town.  If you want a taste of Mario Batali’s Italian then stop into Babbo for pizza, pasta, and more.  If you want a truly spectacular and totally Boston taste of Italy then you need to grab a seat at the upscale, diner counter at Sportello.

Blue Dragon is another celebrity chef’s hot spot.  Blue Dragon is Ming Tsai’s version of a Gastropub with a modern twist on dumplings, bahn mi, noodles and more. For your seafood fix, you have to stop into Row 34 (from the same folks behind beloved Island Creek Oyster Bar.  Also in the neighborhood is YoSushi! for that sushi train experience that the kids will love.  With locations in other parts of town, but coming to the Seaport are Better Bagels and another fast and light mediterranean dining spot on the more casual end of things Aceituna Grill.

That’s just the neighborhood, but you can also settle into the hotel and never leave if that’s the kind of vacation you are looking for. The Element has such spacious rooms, great common areas to relax in, a full kitchen in the rooms, and a bright, salt water pool area as well as a gym.  You can pack a few games and books, pick up some groceries at a store down the road, and never leave if you like.  You could also take a nice long walk over to the North End to pick up some charcuterie, a bottle of wine, a pizza for the kids, and some sweet treats like cannoli too and call it a night.

The Element has so many great spaces for families.  You have a full kitchen and a little store in the lobby as well as another store just down the road.  If you need to get away but also just keep it simple and relax then you can camp out in the hotel and just chill as a family. Bring some books and board games and play in one of  the lounge spaces, go for a swim, or get in a workout.  A night or two away from all the chores and “same old routine” of home is amazingly refreshing.  Wake up and stroll downstairs for a breakfast with everything from fruit, smoothies and granola to waffles and egg sandwiches.