I recently had the opportunity to create a recipe using Hood Sour Cream.  Even though I cook a lot, I am usually a recipe cook.  I occasionally do a little kitchen improv but I never write it down.  So in fact this was my first ever experience developing a recipe and I had a blast doing it. I was compensated for my time and ingredients to create this recipe and participate in the cook-off.  What I care most about when I choose a sour cream is that there are no unnecessary ingredients. Hood Sour cream is made with cream and milk.

I developed the recipe while on vacation in Canada and then a week later found myself at a blogger cook-off in Boston at the Boston Center for Adult Education in the South End (such a fab place I highly recommend that you stop by for a class or at least to see Brian Samuels’ The Mood of Food photography exhibit.). The goal was to create a dish with sour cream as an ingredient.  There were so many tasty dishes I was up against, but to my great surprise and joy, the kugel won.

My middle initial is ‘s’ and it might as well be ‘s’ for sour cream.  I have vivid memories of standing next to my mother as she cooked and waiting wide eyed for the chance to lick the spoon after she scooped out sour cream.  I don’t have childhood memories of noodle kugel, but in college I started making it for break fast at Yom Kippur and it’s an early fall comfort food.  I prepare it with two sauces here, but it can work for any season.  I love the blueberry sauce because it has the flavours of a blueberry blintz without all the hard work of making them.  The cinnamon sugar sour cream dollop is heavenly for fall.  It can be served with baked apples or sautéed apple slices too.

Choose which sauce you would like to prepare or make both and allow people to dollop whichever one they prefer.

Directions
Preheat oven to 350℉
Place a large pot of water on the stove to boil.  Throw in 3 tsp. of salt.
Butter an 8×8 glass baking dish.

Once water has boiled, throw in pasta and cook as directed (usually 5-7 minutes).  The pasta should be al dente. Drain noodles and set aside to cool.

In the empty pasta pot or a saucepan melt the 1/4 stick of salted butter and let it brown slightly.  Pour the butter into a bowl to cool slightly.

While the butter cools, separate your eggs: yolks in a small bowl and whites in a medium sized bowls.  Make sure no egg yolk or fat of any kind touch the bowl because otherwise the whites will not whip correctly.

To the butter add, 1/2 cup of granulated sugar, 1/2 cup of buttermilk, and the two yolks from the eggs.  Whisk or mix together with a fork. Then, add in 1 1/2 tsp. of cinnamon, 1 cup of sour cream, and 1 1/2 cups of cottage cheese.  Mix until combined and uniform.

In the medium sized bowl, beat the egg whites with an electric mixer until stiff.

Combine the cooled pasta with the sour cream, egg, buttermilk mixture.  Then carefully fold in the egg whites.  (If you want to make the recipe without separating the eggs, go for it.  It will still be delicious, just a bit more dense.)

Pour the pasta, sour cream, buttermilk, egg, etc. mixture into the prepared baking dish.  Do not flatten it all down.  Just let the mixture settle in.

Sprinkle sugar lightly over the dish.  A dusting is plenty but if you have a sweet tooth you may use the whole mixture.

Bake for 45 minutes to 1 hour.  The kugel will have a little jiggle in the middle when done and will be golden and just slightly crispy on top.

Serve warm or room temperature with a sauce or two.

Sour Cream Cinnamon Sauce:  Mix all ingredients and chill before serving.  You can do this while the kugel bakes.

Blueberry Sauce:  Add blueberries and maple syrup to a saucepan over low heat.  Cook for 15 – 20 minutes until blueberries are blistered and soft.  Mash with a fork.  Pour into a bowl and swirl in the sour cream. 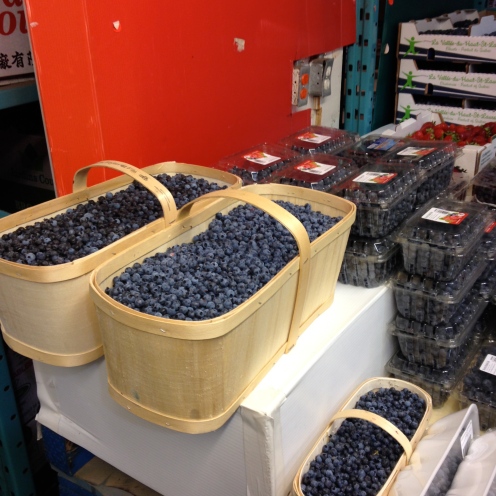 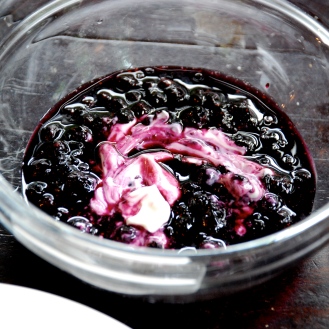 Cinnamon sugar and sour cream topping for the Noodle Kugel. Serve with caramelized apples for a show stopping brunch or dessert. 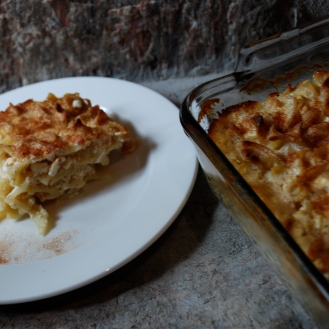 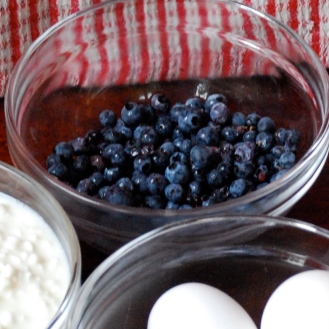 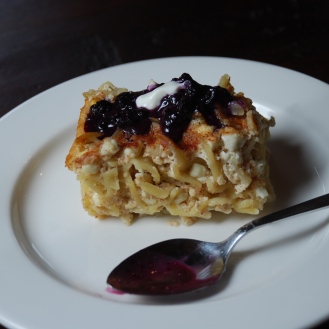 Classic comfort food. Noodle Kugel is the Jewish version of a bread pudding. A dish for all seasons.

Ingredient shot. I just want to dip my finger into the sour cream bowl!

Leave a Reply to Krystyn @ Really, Are You Serious? Cancel reply